VAR010 The Race for the Cape – Martin Barraclough 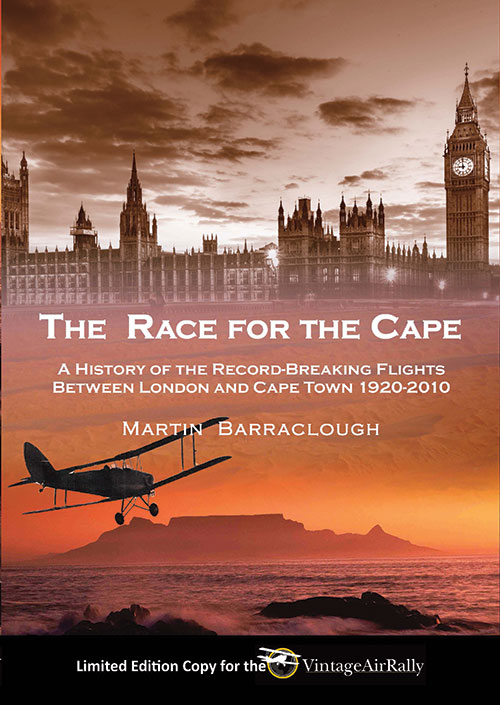 For the first time Martin Barraclough tells the full story how, throughout the last century, British and South African pilots conquered the air routes from London to Cape Town with ever-increasing speeds.

His history starts in 1920 with the creation by the Royal Air Force and the colonial administration of 43 landing grounds from Cairo to Cape Town – later known as the Imperial Route – to allow aeroplanes to fly the length of the continent. It closes with the continuing challenge to current aviators to beat the FAI’s Class records, or aspire to the ultimate challenge of a solo return flight of 10,000 miles over some of the world’s most inhospitable country and through some of the planet’s most hostile weather.

In the 1920s and ’30s the route between London and Cape Town was, with the Atlantic crossing and the route to Australia and New Zealand, the proving ground for British aircraft and British pilots. Household names such as Amy Johnson, Jim Mollison, Tom Campbell Black, Arthur Clouston and Alex Henshaw all vied with their fellow aviators for the honour of wearing this crown.

Profusely illustrated with contemporary photographs, maps and log-book entries the book comprises a chapter for each record-breaking flight together with a chronology of all the attempts on this record. The appendices include a biography of the great 1920s benefactor of British civil aviation, Lord Wakefield of Hythe, as well as a new examination of the disappearance of one of the great lady aviators and record breakers of the 1920s, the Duchess of Bedford.

The author learned to fly in Kenya in 1953 and himself flew the length of Africa in the 1950s. In the 1970s, he and Tom Storey saved Alex Henshaw’s famous Mew Gull from destruction and in 2010 he managed Steve Noujaim’s current world record-breaking flights between London and Cape Town. Among other writings, in 2012 he published the first anthology of English aviation poetry since 1942, entitled "Give Me The Wings".