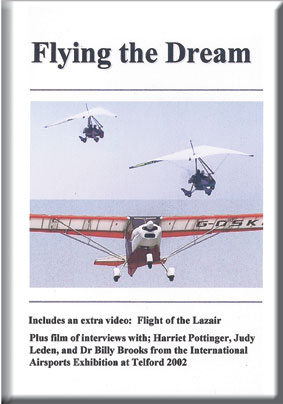 In the video we have tried to answer many of the questions a newcomer to our sport is likely to ask, and who better to answer them than Chris Finnigan, ex Chief Executive Officer of the British Microlight Aircraft Association.

We have tried to include as mush air to air film of microlights as possible. Throughout the video we have tried to show the pilot's eye view, so you can get an idea of the freedom and excitement that awaits you when you take to the air as a microlight pilot.

This video was filmed during the summer of 2003, which was one of the hottest and driest on record. As a result, much of the flying footage shows people in shorts and T-shirts. Normally we wear warm clothes and flying suits when flying our open cockpit aircraft, so we took advantage of the warm weather while we could. With more summers like that one, the sight of people flying around in light clothing could soon become the norm.

Includes an extra video: Flight of the Lazair
Plus film of interviews with; Harriet Pottinger, Judy Leden, and Dr Billy Brooks form the International Airsports Exhibition at Telford 2002.