Pooleys - A passion for aviation and dedication to our customers 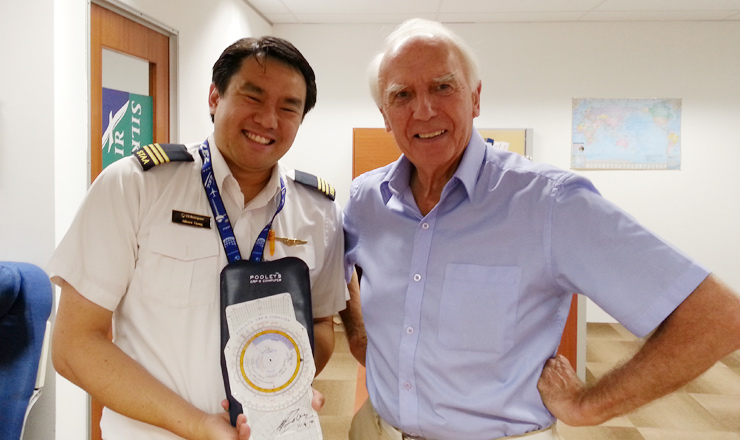 Pooleys is a family owned and operated business, founded by Robert Pooley on leaving the Royal Air Force in 1957. Robert handed over the running of the company to his son Sebastian in 2007 having, in 2005, established a new company, Pooley Sword Ltd, manufacturing British military and Commonwealth swords as well as special ceremonial swords which are sold worldwide. Pooley Sword operates from Shoreham Airport and Abbeydale in Sheffield.

Over the years, Pooleys has become a well respected name in the Aviation Industry, not just in the UK but globally, as a leading manufacturer and publisher of Aviation, Pilot Training and Flight Equipment. We now sell over 2850 products worldwide including many of the worlds most recognisable aviation brands.

In 1957 we made our first Knee Board. In 1962 we published our first Flight Guide (Europe) and in 1964 the first UK Flight Guide. The very first CRP-1 Computer was produced in 1964 with input from the Civil Aviation Authority among others and was followed by the CRP-5 in 1966. The CRP-1 and in particular CRP-5 computers are now the standard recognised computer for commercial and ATPL pilot training.

We published our first technical book 'Aerobatics' (Airlife) in 1974 and in 1995 took over the manufacture of the Aviat series of Flight Computers. In 2000 we published the first of our ATPL Airline Pilots Manuals and commenced the publishing of Pooleys Air Presentations, our PPL aviation ground school series. Pooleys opened its first wholesale and retail shop in Africa at Grand Central Airport, Johannesburg in June 2002. We currently have 5 Pilot Shops open across the UK at Cambridge, Cranfield, Elstree, Oxford and Turweston. In 2021, we also opened our latest pilot shop at Wilson Airport, Nairobi, Kenya.

In 2022, we celebrate 60 years of the Pooleys Flight Guide to the United Kingdom. To coincide with the 50th anniversary of the Pooleys Guide in 2012, we launched a digital version, Pooleys iPlates, as an app for Apple and Android devices. Pooleys digital plates are now available on half a dozen platforms.

In 2022, Pooleys celebrates its 65th Anniversary.

This website of Pooleys Flying and Navigational products and accessories has been compiled to assist Pilots and Navigators involved in all Flying disciplines to select their requirements from this most comprehensive range of the finest aviation equipment.

Our aim is to standardise the quality of flying training, teaching and learning equipment through schools and their instructors throughout the UK. All the aviation training publications that we produce have been closely scrutinised by the CAA and the leading schools and instructors in the UK.

Experienced Pooleys' staff are available to help with further specifications and quotations for the complete range, and bespoke equipment which, in the past, has included landing calculators for Concorde and the 747. With our own factory in the UK, we are able to manufacture bespoke products in small numbers with a very short lead time at competitive prices.

Pooleys have set the industry standard in so many areas of manufacturing and publishing of aviation products that other companies, over the years, have strived to emulate. Our equipment is now sold to over 100 countries around the world.

Our family motto is Conare et Vinces - Try and you will Succeed.