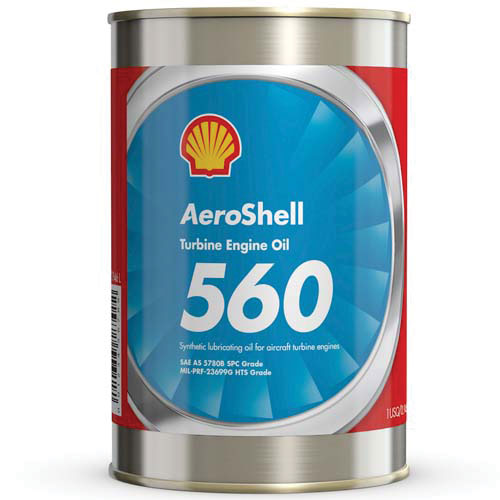 AeroShell Turbine Oil 560 was developed to withstand the hostile environments of todays high powered, high compression engines in which the older generation of oils can be stressed up to and beyond their thermal limits, as evidenced by oil coking in the high temperature bearing areas. By overcoming the problems associated with using old technology oils in new technology engines, AeroShell Turbine Oil 560:

In order for military authorities to take advantage of this better performance in military engines the specification MIL-PRF-23699 was re-written to include a "High Thermal Stability" (HTS) grade as well as the Standard (STD) and Corrosion Inhibited (C/I) grades. AeroShell Turbine Oil 560 is fully approved as an HTS oil. With effect from January 1st 2002, AeroShell Turbine Oil 560 has been manufactured with an improved formulation to further enhance its anti-coking performance. AeroShell Turbine Oil 560 contains a synthetic ester oil and should not be used in contact with incompatible seal materials and it also affects some paints and plastics. Refer to the General Notes at the front of this section for further information.

Not available for guaranteed next day delivery. Please allow 2 working days for delivery.