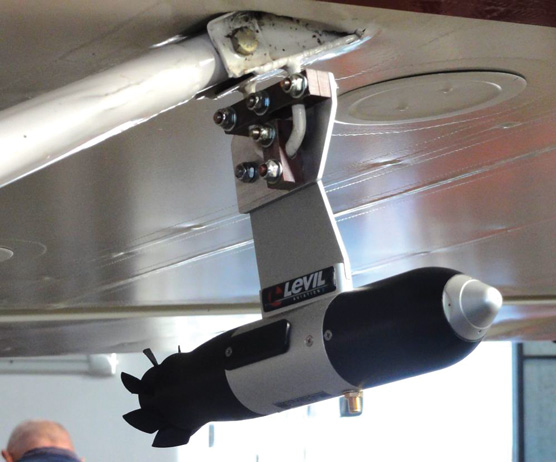 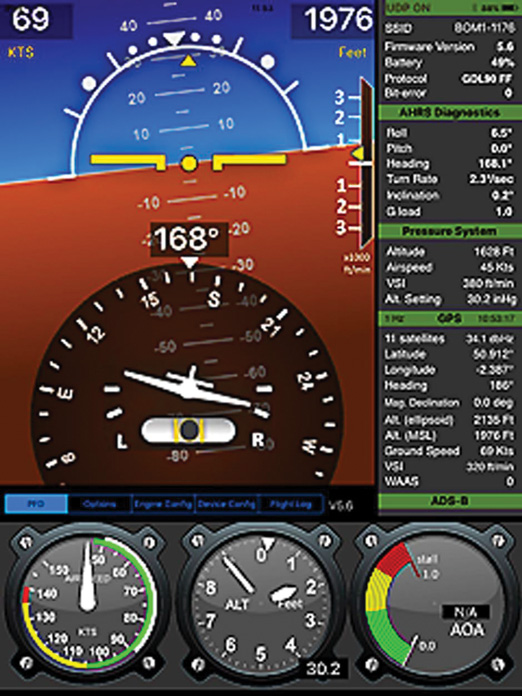 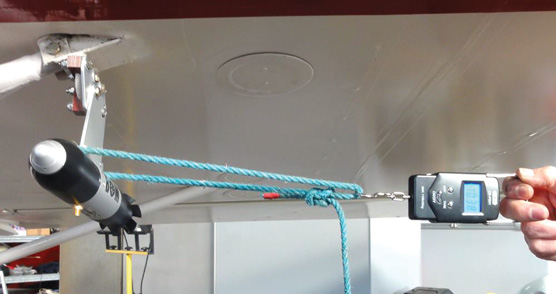 Bom(b)s away! Is this impending doom for the dinosaurs?

Wandering around the LAA Rally, Ian spied this device on the Adams Aviation stand. After discussion with Robbie Connington of Adams he discovered it not to be the munitions package it looked like, but actually the latest in technology supporting flexible low-cost electronic cockpit instrumentation. Adams offered to lend one for a brief evaluation. (pic 1, Levil BOM). 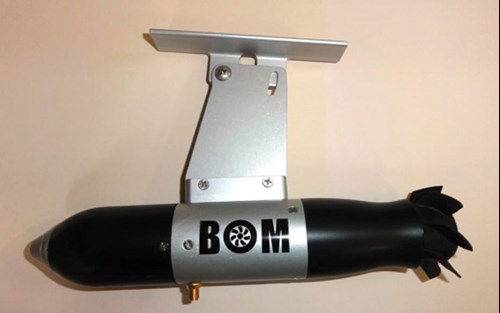 The Levil BOM (Broadcast Outer Module) is a self-contained AHRS (Attitude, Heading and Reference System) sensor. AHRS refers to the function of the normal group of flight instruments traditionally found in most aircraft, i.e. ASI, Altimeter, Horizon, Compass, DI, turn coordinator, slip ball. The DI, Horizon and Turn coordinator are traditionally provided by gyro instruments with all their attendant weight, reliability problems and complexity. Modern electronic instruments such as the BOM use solid state gyros, accelerometers and sensors to replace the dinosaur technology and generate the same, if not better data. The BOM has also air ports and pressure sensors to provide airspeed and altitude data that are normally provided by steam gauges and the pitot system. Interestingly, it even provides angle of attack. But it doesn’t stop there; there is more electronics providing GPS, ADSB-In and a WiFi controller. All the data is available over its dedicated WiFi to up to 5 tablets or smartphones simultaneously. It’s all wireless. When appropriate applications are loaded onto the smart devices, they can display all the flight instrument data hitherto provided mechanically or pneumatically. Several applications are available compatible with the BOM.

The beauty is that even the power is wireless, or at least no wires need to be connected to the aircraft. There is a small internal battery to get it going and provide up to 4 hours back up, but the normal source of power in flight is from a wind driven generator. The small turbine at the rear and the rounded nose really do give it the look of some sinister weapons system. (Pic 2 BOM in flight). 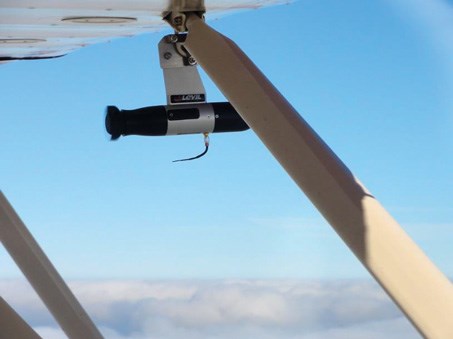 After a brief exploration into fitting it to Ian’s RV6 and the discovery that the LAA wanted a full modification proposal, we fitted it to Nicks N registered Citabria under the much more owner-friendly FAA NORSEE procedure. Equipping ourselves with an iPad (hosting Levil’s utility app) and a couple of Android devices hosting Sky Demon, off we went to do the set-up and a test flight. BOMs away Issue final with pics.

To switch it on (on the ground) you are supposed to tap it rapidly for about 6 seconds then look for the BOM WiFi on a smart phone. That didn’t work too well and we had to kick start it with a USB charger to get it going for set up. We suspect that the battery may have been flat as we have seen the tap method work. The only essential thing to do on the ground was to set the V speeds and tail number for the Citabria in the Levil utility app, then on to the flight: 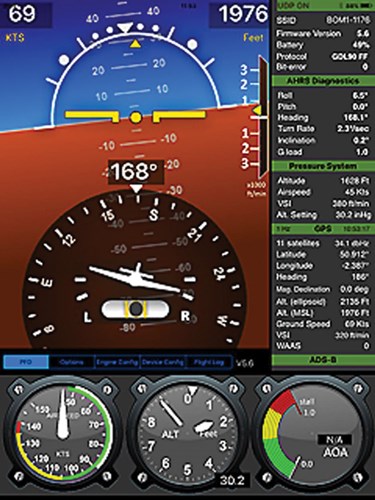 In normal operation, the device should detect vibration from the engine to switch on (hence the tapping). It didn’t switch on with the engine vibrations either and we had to wait until its generator had spun up at about 40 Kts before the unit sprang to life and our smart devices detected the BOM Wi-Fi. Immediately, the Levil app on the iPad displayed a clear functioning instrument panel pic 3 and Sky Demon on the android devices could be set into “Fly mode” using the “Levil GPS” input. We were ready for the in-flight set-up process. This required flight at normal cruise and slow flight. First was a check against the aircraft’s ASI and altimeter, then setting of the angle of attack and horizon function. The Airspeed was about 10% out but we could not get the Levil utility to accept a change so we ignored it to get on with our tests. Setting up the AoA was simplicity itself, just fly S&L at 1.15 times stall speed and press a button. Then the AoA gauge sprang to life. Finally, the horizon: on the ground we had about a 10 deg bank error and unknown pitch reference; calibrating these was an extremely simple process, just requiring one key stroke.

In flight we went through all the instrument functions comparing them where possible with the aircraft’s own equipment and the real world outside. Notwithstanding the inaccuracies we knew about on the ASI, we found the instruments to be very clear, very stable and very accurate. The magnetic compass required no calibration, pointing very accurately at known landmarks. The horizon, ball and turn coordinator were also nicely damped and responded correctly to how the aircraft was being flown. Unfortunately, the altimeter on the Levil app is set in inches rather than millibars so needed conversion but once calculated was accurate straight out of the box. BOMs away Issue final with pics.

We spent some time playing with the AoA device to see how it worked (pic 4 AoA in slow flight). It was very accurate in terms of indication of where stall would occur but did initiate questions from Nick as it seemed to stay in the green arc during his approach and landing (we would have expected yellow). It would need more testing time and thinking and perhaps more precise calibration before you could really set about using it to optimize landings. On the whole, a very good bit of equipment. 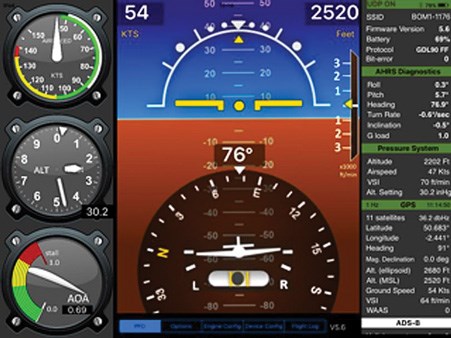 The electronic conspicuity function, ADSB-In and UAT, was less encouraging. Ian has now tested several such devices from various manufacturers and he has a” quick look” standard procedure using the Sky Demon FISB weather transmitter at Milborne Port which he has found to be quite indicative of effective ADSB range. Usually, we expect be receiving it from at least 10 miles, but with the BOM we only saw it 2 miles from the transmitter. As far as traffic was concerned there was none seen on SD, none reported on the iPad app, and none seen out of the window or heard on the radio, so we have no idea if it works or not. We picked a bad day; or good, depending on your viewpoint.

Conclusion. It certainly is an impressive gadget and well worth consideration. It is unique in its comprehensive set of flight instruments while being entirely autonomous. Its applications are most likely to be as additional or back up instrumentation in a simpler cockpit, non-electric aircraft or for duplicated instruments in the rear seat of a tandem without the plumbing and wiring hassle. We suspect the startup problems we encountered were related to first installation where the battery has been used a lot for demo purposes prior to set up. The ASI adjustment is probably finger trouble or SW problems that can be easily resolved with a SW update. The ADSB (UAT/FISB) range was not resolved. It could be antenna related but we didn’t want to try bending the antenna on a demo sample. Another point is that the full display is only available on the iPad, not on Android. None of these issues should be difficult and once they are resolved it will be an excellent device.

Installation: The installation specification for the BOM requires that it be positioned under the wing on a mount demonstrated to be capable of supporting a 10lb (4.5Kg) load in all directions (pic 5). BOMs away Issue final with pics.

That works out as more than 10 G for the 380-gram BOM. It should be close to the leading edge so that the GPS receiver gets a view of the sky and the air sensors get undisturbed air.

Plan A was to fit it to the tie down point on Ian’s RV6 but the LAA requested a full modification application, and suggested significant testing was necessary before they could approve it. During testing they requested installation of a camera to observe it. A little surprising as it is only just over the self-approved camera mount weight. We only wanted a temporary installation to test but were faced with a having to fly a test program in order to be approved to test fly it - Catch 22.

That left us stumped for a while until we remembered Nick’s Citabria is on the N reg and decided to check the rules for fitting to that. The Levil BOM is FAA approved as a NORSEE (NOn-Required Safety Equipment Enhancement) item for all aircraft, not just experimental. It turns out that NORSEE allows such devices to be fitted to an N registered aircraft with no fuss.

We spent a few hours constructing a simple but gloriously over-engineered clamp (pic 6 clamp) to attach to the Citabria tie-down point, conducted the specified pull tests and had it all blessed by the local FAA engineer. No paperwork was harmed in the making of this installation. Then we went flying.

General Comment: There are several potential items around that could be regarded as “Non-Required Safety Equipment Enhancements” that sit in a grey area between LAA modification approval and inspector sign off. It would be nice to have a clear LAA policy (like the FAA’s NORSEE approach) to allow adoption of this sort of sensor and its display devices without the complications and delay of the full modification process. Particular items of interest here are clip on aircraft powered tablets, EFB devices, portable GPS devices and remote antennas.